Lilian Salim, President of the Brazilian Flame retardant association (Abichama) was interviewed by the Fire Magazine in Brazil and reinforces the importance of using flame retardant materials in order to increase fire safety on cinemas and theatres.

The article concerns the importance of using flame retardant materials to reduce fire risk on leisure spaces and highlights the significance of coating materials for furniture, as well as well-structured escape routes.

According to IT-14 of the São Paulo Fire Department, which is adopted by several other Brazilian states, cinemas and theatres have a fire load of 600 megajoules per m², which can be considered a medium risk.

Lilian Salim, president of ABICHAMA, affirms, however, that the fire load must also be considered as this will depend on the type of material used in that environment, either in finishing or coating materials or in furniture. “Therefore, the choice of materials with flame retardants is very important to reduce the risk of fire in these places” the president emphasizes.

On leisure spaces, the materials used should have fire safety capability to avoid the ignition or the rapid growth of a fire. “There are different ways of treating these materials so that they meet the required safety requirements. I believe that the best way of ensuring this is to incorporated flame retardants during the production process of materials, which guarantees its long-term performance and give them the necessary elements that hinder its ignition”, says Rosária Ono, coordinator of the Fire Safety Promotion Group (GSI). […] “This treatment of furniture is not required by the regulations of the Fire Brigade, therefore, it is not mandatory in Brazil, but it is recommended”, she reports. 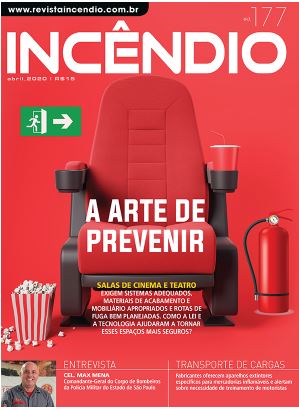 For Lilian, from Abichama, “with the growing awareness of the civilian population, businesses and the technical community, the demand for flammability control technologies should grow naturally”. According to her, the revaluation of fire safety standards must happen continuously, both because of major fires that occurred in the past, which showed us the vulnerability of the current model, and because of the development of new passive fire protection technologies.

The president of the Association recalls that, since the tragedies at the Portuguese Language Museum, in 2015, and at the National Museum, in 2018, “little progress has been made in this field”. Since then, some legislative proposals have been discussed, such as PL 1092/2019, which dealt with the ban on the use of polyurethane foam in buildings intended for artistic, cultural and sports activities or collective dormitories, as well as PL 592/2019, which provided for mandatory sprinklers in any public and private establishments.

“These legislative proposals were appended to PL 4923/2013, which deals more broadly with the issue of the obligations of owners of establishments operating in closed places. However, despite being ready to go to the Plenary, this proposal is still delayed. We have a lot of work ahead of us regarding the laws and regulations, but we are on the right track”, concludes Lilian.

Graduated in Chemical Engineering from FEI-Faculty of Industrial Engineering with Postgraduate Degree in Business Management and Product Administration from Fundação Getulio Vargas – GVPEC, Lilian Salim has 32 years of experience in the B2B market working in various areas such as: sales, marketing, development. products, regulatory affairs and others. Professional career developed in companies such as Ipiranga Quimica (currently QuantiQ) and multinationals such as DuPont, Arkema and Dow Quimica. Responsible since 2007 for the elaboration and creation of ICL IP Industrial Products Division for all South America, currently leads a sales and marketing team operating in all countries of the region.