The study took a pure “polymeric FR” and subjected it to a series of degradation experiments (by heat and UV exposure). The study then looked for indications of degradation via some indicators (total bromine, total organic carbon) and also attempted to identify potential degradation products.

“In our view, the article by “Environmental Health News” (United States) from 9 January 2019, covering this publication, significantly over-interprets the study results and draws conclusions that are not justified by the study findings. ” said Dr Kevin Bradley, BSEF Secretary General. He further noted that “the aim of the study was not to simulate realistic conditions but to conduct fundamental research. Therefore its conclusions should be treated with caution”

Under the most realistic scenario – heat exposure – the authors found very little degradation. Of the 7 degradation products reported, only 1 was brominated. 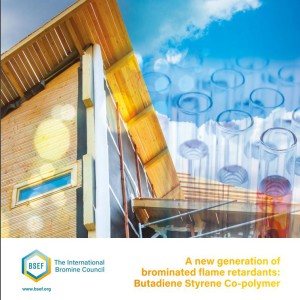 Dr Bradley further noted: “the study used pure “polymeric FR”, so it so was not incorporated in a polystyrene matrix as it would normally be”. This is not realistic and obviously increases its susceptibility for degradation”. The authors of the paper confirm that “the focus laid only on the degradation of pure “Polymeric FR”, which was not incorporated into EPS or XPS products, but solely exposed to heat, which might have an impact on the results observed”.

The only scenario where potential degradation products were formed was in the presence of UV radiation, and heat/ moisture. “For polystyrene foam applications in building and construction, “polymeric FR” is not subjected to these conditions”, said Dr Bradley. The authors confirm that degradation during the service life “is probably not to be expected, but is an important fact for evaluating the claimed superior environmental behavior compared to previous BFRs.”.  The authors also point out that more emphasis should be placed on the “end-of-life of an insulation product”

Butadiene Styrene Co-polymer (“Polymeric FR”) is designed specifically to deliver improved EHS properties (non-PBT) and was developed over many years of careful research as replacement for HBCD. It has a superior sustainability profile compared to HBCD (EPA Report June 2014).  “It represents an important and innovative step forward for the Industry in providing effective flame retardant performance in polystyrene foams such as Expanded Polystyrene (EPS) and Extruded Polystyrene (XPS)”, noted Dr Bradley.