Another successful edition of International Electronics Recycling Congress IERC 2020 took place in Salzburg from the 22 till 24 of January 2020. Once again, BSEF – The International Bromine Council, was proud to sponsor and took an active part in the debate. 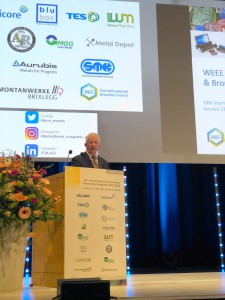 “Brominated Flame Retardants (BFRs) plastics are typically 5%-10% of the total WEE plastics arising. They are mostly found in HIPS, ABS or PC-ABS polymers” said Kevin. “A key issue on the treatment of these plastics containing BFRS is how to separate restricted from non-restricted BFRS, however only four of 75 BFRs in Commerce today is restricted or recently restricted at the EU and International level” highlighted BSEF´s secretary General.

Kevin´s concluded by saying that “BSEF and its members are investing in the end of life treatment of WEEE plastics” and that “Circular Economy is a journey – not a destination and will take time, investment and innovative ideas and policies”

The idea of strong Circular Economy policies was reinforced by other speakers during the conference such as Dr. Egbert Lox from Umicore Group that said that “The Circular Economy approach is even more needed now to enable a fair degree of sustainable mobility”. 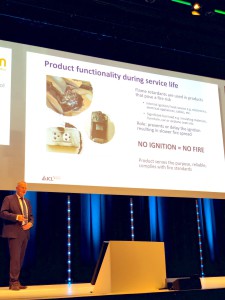 Lein Tange, Sustainability Director at ICL-IP, had the opportunity to present innovative technologies that allow plastics containing Flame retardants to be part of the circular economy. “Flame retardants are used in products that pose a fire risk, and its role its to prevent or delay the ignition – so No ignition, no Fire!” said Lein.

Lein Tange presented emerging technologies that focus on chemical or physical methods that allow separation of basic components and recycle them in dedicated streams using technologies such as the CreaSolv technology and Plastics2becleaned project.

In addition, Lein highlighted the PolyStyreneLoop project that aims to close the loop of polystyrene foam, by recycling the foam and recovering the bromine. “This project demonstrates how the polystyrene value chain meets the fundamental requirements of a circular economy, by ensuring a technically, economically and environmentally sustainable closed-loop recycling system” said Lein.

This year´s edition also counted with 40 booths that provided the perfect opportunity to reach key industry decision-makers and to find out what’s new in the global electronics recycling business. Cocktail receptions and a networking dinner created an excellent atmosphere to get in touch with business partners, friends and competitors.

This year IERC Honorary Award went to Surendra Borad Patawari, founder of the Gemini Corporation N.V. Belgium. “Surendra Borad Patawari receives this award in recognition of his lifetime’s work in the sourcing, processing and reuse of raw materials with a view to circular economy,” said Jean Cox-Kearns, Chairman of the Steering Committee of the IERC, at the award ceremony.